I have been monitoring my sugar intake, not as a way to avoid diabetes but more for seeking a healthier lifestyle.  I am currently working through the third week.  The second week was a great accomplishment of overthrowing the first week’s numbers and conquering an extra day of a sugar-free lifestyle.  However, this week seems to not be working out as well. 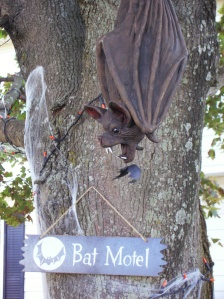 The celebration of the holidays is usually a weak spot for me.  My mother, a devoted fan of my blog, chastised me for taking home a handful of chocolates after she had extended an invitation to the candy dish on Halloween night.  She then remarked that my hands were overflowing and predicted that I would finish all of them in one day.

Well, I had to laugh and rebel against my mother’s predictions.  It took me THREE days to polish off the chocolates.  Whereas, my husband only needed a half a day to see the bottom of his candy jar.

As I look back on my calendar, I am saddened by the lack of purple stars for the week.  Is there no self-control?  Am I so far gone that I have no hope for a healthier me, or for a child to reside within my womb? 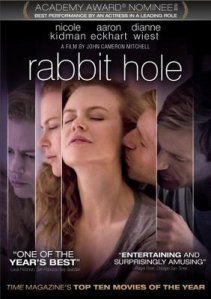 My husband and I watched a movie called Rabbit Hole starring Nicole Kidman, Aaron Eckhart, and Dianne Wiest.  I really didn’t know what it was about.  The cover at the video rental was vague, but I wanted to watch something different other than static channels and previously watched DVDs collecting dust inside the video cabinet.

The tone of the movie was sad and a short while later we understood that it was about a couple grieving the loss of their son who died in an accident.  It was an accident where it was no one’s fault; just fate stepping in and taking away what we treasure close to our hearts.

During the movie, I felt that I could not relate to the couple.  Sure, I have lost family and friends in the past.  The grief was overwhelming at times.  But, who was I to compare myself to parents who had their young child torn away from them?

However, I was wrong.  We are no different than they are.  My husband and I, too, lost a child; albeit a fetus at that, but a child none the less.  This is why my heart breaks and tears well up in my eyes when I hear of another parent whose child has passed away.  I know their pain.  I know their grief.

I wasn’t lucky enough to lay eyes on my child nor was I able to hear their voice.  I don’t have a clue as to whether they would have been a girl or a boy.  I consider those who have had a chance to hug their child, hold their hands, and wipe away their tears (even if it was for a brief moment) the luckiest people on earth.  They were given a miracle to love, and memories to cherish.

If nothing else could get them beyond their grief, my hope is that they would see what they had and hold onto those memories.  See their child playing and learning.  Hear them talking and laughing.  All they would need to do is just close their eyes and relive some of those precious moments.  Then, they would know that their child was with them in spirit and reliving those same memories.

I cannot recall memories of my child.  The only memories I have is crying in the doctor’s office when they confirmed my pregnancy; telling my husband and my family; talking to my belly letting the baby know how much I loved him/her; and my doctor trying to comfort me after the terrible news of my miscarriage.  However, when I close my eyes I dream of what could have been.

Sam would be four now, and I imagine the two of us having a blast playing with his/her toys, spending our days in the park, eating our meals at the table, telling me the cutest little stories, reading him/her to sleep, and answering the many questions he/she has.  I imagine the tickle monster coming out to play and the hugs and kisses we would share, and we would be giddy with excitement for the upcoming holidays.

Sometimes, I would think of Sam as girl and she would have long whispery blond hair like her father’s.  She would wear pigtails, braids, and curls.  We would have fun picking out the prettiest dresses and the cutest accessories.  She would have been the girl in my visions; the one I knew I would have and enjoying a summer’s day at our friend’s house on Lake Huron.

Then, I would think of Sam as a boy.  He would look up to my nephew Devon and immolate his cousin; the football star.  He would ask his father to toss the ball with him in our backyard.  His hair would be brown, and he would have big blue eyes that danced when he giggled.  He would play video games with my other nephew, and I would chastise Nathan for letting him play the more risqué games.

I know it’s not healthy to dwell on what could have been, but it reminds me of what could possibly be.  One day, I could have this.  It is within my reach, and one day all of this could be mine.  Just like one day the pain of grief will diminish for others as it has done for me, and all that will be left is a saddened heart and memories of what was.

I may not have reached any goal this week to reduce that sugar intake, but the reminder of how it restricts my chances for fertility is always on my mind.  With my menstrual cycle starting a new month, it will give me another chance to further reduce the sugar consumption.  Maybe one day, I will be completely sugar-free and maybe that will be the day I could conceive, again.  Maybe… just maybe.

All photographs on this blog are the property of Stacy N. Elliott and are original works of art; with the exception of  guest pictures whereas credit will be given to the creator of such works.  If credit was not given, please notify Stacy at mommywritesstudio@gmail.com immediately since absent-mindedness can lead to forgetfulness and her intentions are to ensure that everyone is credited for their own creations.  Header photograph and featured photograph for Mommy Writes was done courtesy of Ami Moeller at Oaklei Grace Photography.  Please visit Ami’s  Facebook page for more of her art.  Additional artwork that may appear come courtesy of the rockstar artists from pixabay.com